Ukrainian Christmas Greetings – Jan 5, 201905 January 2019
January 4, 2019in News 0 Likes
Ukraine: Weekly Bulletin
December 29, 2018 – January 4, 2019
1. Russian Invasion of Ukraine
Ukraine’s Ministry of Defence reported that during the week of December 28, 2018 – January 3, 2019, one Ukrainian soldier was killed and six Ukrainian soldiers were wounded in action on the eastern front. Throughout the week, Russian-terrorist forces opened fire 34 times on Ukrainian positions on the Luhansk and Donetsk sectors of the front, including at least 8 times with heavy weapons. Ukraine’s Joint Forces Operation headquarters reported that returning fire, Ukrainian forces killed 9 and wounded 18 enemy combatants in the last week.
2. All 24 Ukrainian sailors illegally imprisoned by Russia declare themselves POWs

The Kharkiv Human Rights Protection Group (KHPG) reported, “All 24 Ukrainian naval seamen whom Russia took prisoner on 25 November have declared themselves prisoners of war.
Although the men’s POW status, according to international law, was never seriously in question, all have been under immense pressure from the FSB to ‘confess’ to non-existent crimes.  Given the conditions the men are being held in, the fact that all have remained unwavering is a credit to them, and to the team of lawyers, under the coordination of Nikolai Polozov.
Three of the men were seriously injured, and all 24 taken prisoner on 25 November, after Russia blocked access to the Azov Sea, rammed one boat and opened fire on all three Ukrainian vessels.
The international media has already reverted to its customary ‘Russia says / Ukraine says …’ style of reporting, however Russia’s behaviour was immediately condemned far beyond Ukraine as an act of open warfare.  The men’s release has been repeatedly demanded, most recently in a joint statement by Germany’s Chancellor Angela Merkel and France’s Emanuel Macron. […]
Moscow has rejected this call with its standard stream of lies about the status of Crimea, etc.  This is to be expected since such calls have yet to be accompanied by penalties for Russia’s insistence on behaving like pirates and breaching international law.  Without some form of sanctions, unfortunately, Russian President Vladimir Putin is unlikely to release any of the Kremlin’s hostages in the run-up to Ukraine’s presidential elections at the end of March for fear of helping Ukrainian President Petro Poroshenko’s chances of re-election.
Moscow’s efforts to present its aggression on 25 November as Ukrainian ‘provocation’, and the FSB’s standard stunt in using illegal methods to force three of the men into ‘confessing’ on camera, made the need for a serious legal term working in close coordination clear. Polozov reported on 28 December that their initial task has been completed.
‘The fact that all the Ukrainian seamen seized by Russia have identified themselves as POWs demonstrates that Russia’s plans to divide and disorientate the captured seamen have failed.’   This, he explains, will help in the battle to get the men released. […]
It was particularly important, Polozov says, that the Ukrainian authorities reacted swiftly and mobilized efforts, making it possible to organize a team of lawyers for all the men within two and a half weeks.
This and the fact that the men are united in identifying themselves as POWs will help ensure that their situation is viewed in accordance with international law, and ‘cut the nonsense’ from those European politicians who were loath to admit that it was Russia who violated international law and for the first time in the last five years openly fired at Ukrainian naval boats and took military servicemen prisoner. Such a position will make it easier to consolidate international cooperation in putting pressure on Moscow. “
The full report from KHPG is available here
3. Crimean Tatar activist attacked, viciously beaten in Russian-occupied Crimea

The Kharkiv Human Rights Protection Group (KHPG) reported, “Risa Asanov, one of the Crimean Tatar activists who recently carried aid to Moscow for the 24 Ukrainian POWs seized by Russia, was viciously attacked on 2 January.  The two assailants waited for him to regain consciousness to say that this was his ‘last warning’ and that he would not live through the next attack.
Asanov has played a major role in supporting political prisoners and their families since returning to Crimea from Poland in 2017, and he is certain that the attack was linked with his strong civil stand against rights violations in occupied Crimea.
He posted information about the attack on his Facebook page, explaining that he had been filming a video about the Tavrida Motorway near Belogorsk when hit from behind with what he thinks was a baton.  When he regained consciousness, he was lying close to his car, with one of the assailants telling him, with an accent indicating he was from Russia, that this was his last warning.  The other was more blunt: ‘Next time you’ll die.’
He managed to drive to the district hospital where doctors diagnosed concussion and other injuries.  He reported the attack to the police, but says that he received no confirmation of his report.  What is more, he says, a person whom he first saw at the hospital appeared at the station and, on leaving, smiled at him.  He assumes that this was no mere passer-by.
Asanov’s firm commitment to defending the rights of Crimean Tatars and other Ukrainians in occupied Crimea means that it is unlikely that this will stop him, however that was clearly the intention of this attack.  […]
Aside from attending court hearings, and similar, in political cases, Asanov is working together with lawyers in holding seminars in different parts of Crimea on what to do in the case of searches and arrests.  You can see the results, he says, with people learning how to defend themselves before lawyers get there and not let the FSB plant things [‘prohibited’ books, for example, or ammunition as was the case with Ukrainian activist Volodymyr Balukh]. […]
After Russia secretly, and very illegally, transferred the 24 naval seamen, who are all prisoners of war, to Moscow, Asanov joined Dzhelyal and other Crimean Tatar activists in transporting the huge load of clothes, food and essential items, as well as money, collected for their fellow Ukrainians whom Russia is still now holding prisoner.”
The full report from KHPG is available here
4. Washington Post Editorial Board: US and NATO allies should be acting to deter Russian escalation
The Washington Post Editorial Board wrote on December 30, “It has been five weeks since Russia assaulted Ukrainian Navy ships that were passing through international waters near the occupied Crimean Peninsula. Though the world’s attention has moved on, Russian forces have not: On the contrary, they are massed near Crimea’s border with eastern Ukraine, prompting warnings from the Ukrainian government as well as independent observers that the regime of Russian President Vladi­mir Putin may be planning a new attack on the country. Rather than await the Russians’ next move, the Trump administration should be working with allies to actively deter further aggression. […]
Ukrainians and independent observers are warning that Mr. Putin may be planning a ground offensive. The Washington-based Institute for the Study of War reported on Dec. 23   that Russian military convoys had been moving toward the border between Crimea and Ukrainian-held territory, and that fighter jets had been redeployed to Crimean airfields. Though the purpose of the military movements is unclear, the ISW said, ‘The data suggests that Putin is preparing to attack.’ […]
It could well be that Mr. Putin can accomplish his aims simply by raising the level of tension and by showing he can strangle Ukrainian ports with impunity. But whatever his intentions, the United States and its NATO allies should be  acting to punish Mr. Putin for his coast guard’s actions in the Kerch Strait and to deter an escalation. There are a number of steps that could be taken, ranging from dispatching warships to the Black Sea, with a stop in the Ukrainian port of Odessa, to stationing NATO or European Union observers in eastern Ukraine. There have, as yet, been no sanctions against Russia specifically linked to its seizure of the Kerch Strait; there should be.”
5. Canada, UK start working as joint NATO Contact Point Embassy in Ukraine

UNIAN reported on January 2, “The Embassies of the United Kingdom and Canada on January 1, 2019, started working as a joint NATO Contact Point Embassy in Ukraine. This decision was made by the Alliance. In 2015-2018, the role of the NATO Contact Point Embassy in Ukraine was performed by the Lithuanian Embassy. As UNIAN reported earlier, British Ambassador to Ukraine Judith Gough in December 2018 said the partnership of Great Britain and Canada in the new role in Ukraine would be effective. ‘The first time this has been done as a joint endeavour. Much work ahead as we continue to support Ukraine,’ she said.”
6. Ukraine’s stock market world’s best performing in 2018
The Kyiv Post reported on January 4, “Ukraine’s stock market index PFTS turned out to be one of the world’s best-performing ones in 2018, according to CNBC, a business news channel, a subdivision of American-based National Broadcasting Company television network.
The media outlet reported on Jan. 3 that Ukraine’s performance has increased by as much as 80.39 percent through 2018, as demonstrated by data sources provided by Refinitiv, a global financial data center formerly associated with Thompson Reuters group.
PFTS’s skyrocketing output in 2018 comfortably headlined the list of the world’s fastest-growing stock markets, which also included Macedonia (+30.41 percent), Qatar (+20.87 percent), the United Arab Emirates (+11.75 percent), and Saudi Arabia (+11.75).”
7. Ukraine green energy investments grow 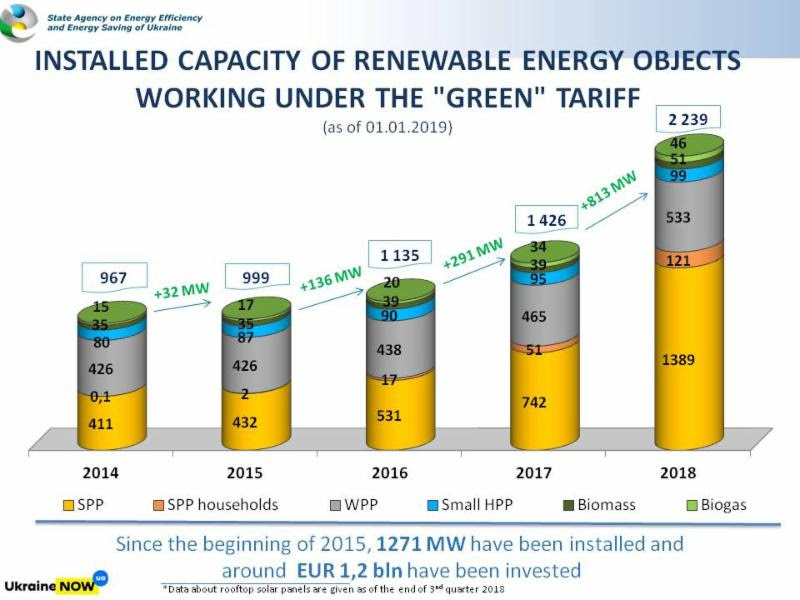 Ukraine Business News reported on January 4, “Ukraine’s installed renewable energy capacity jumped by 54% last year, hitting 2,117 MW, according to the Commission for State Regulation of Energy and Utilities. Of the 742 MW of new installed capacity, 98% was for solar and wind. Solar, the leader, nearly doubled in capacity last year, hitting 1,388 MW. Wind grew by 12%, to 533 MW. Biomass grew by 31% to 51 MW, and biogas by 35% to 46 MW.
In 2018, the Commission set “green” tariffs for 202 renewable energy facilities — 163 solar stations, 16 biogas and biomass stations, 12 small hydropower plants, and 11 wind farms. One third were in Kherson, southern Ukraine’s region with the highest rate of solar radiation, after occupied Crimea. In addition, about 3,000 households installed rooftop solar panels in 2018, equal to half the total for the previous four years, reports the State Agency for Energy Efficiency and Energy Saving.
By 2035, renewables will account for 25% of Ukraine’s energy production, largely displacing coal, which will drop to 13%, predicts Kyiv’s Razumkov Center. Shares of gas and nuclear will remain virtually the same – 30% for gas and 25% for nuclear. Not counting large scale hydro projects, renewables account for 2% of energy production.”
0 Likes