1. Russian Invasion of Ukraine
The General Staff of Ukraine’s Armed Forces reported that during the week of August 18-24, two Ukrainian soldiers were killed and 19 Ukrainian soldiers were wounded in action on the eastern front. Throughout the week, Russian-terrorist forces opened fire 200 times on Ukrainian positions on the Luhansk, Donetsk and Mariupol sectors of the front, including at least 77 times with heavy weapons – mortars, artillery, Grad rockets and tanks.
2. Ukraine’s President Petro Poroshenko addresses the nation on Ukraine’s Independence Day

On August 24, Ukraine’s President Petro Poroshenko addressed the nation on the 26th anniversary of Ukraine’s Independence. To view President Poroshenko’s address, please click on the image below

3. Greetings from international community on the occasion of Ukraine’s Independence Day 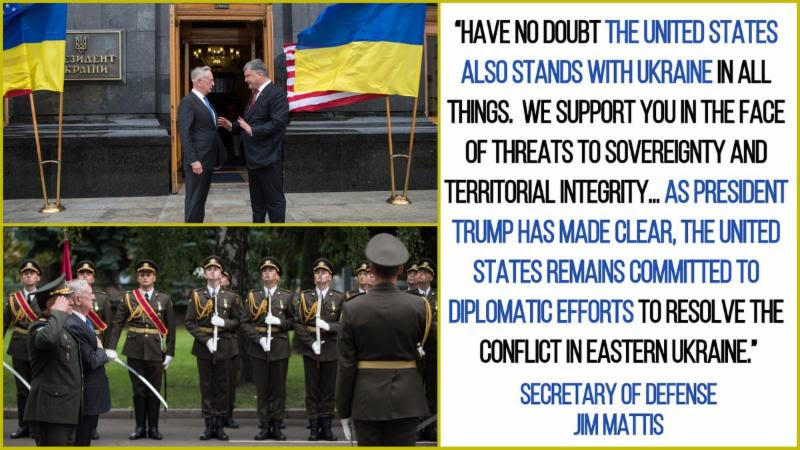 Speaking at a press conference with Ukraine’s President Petro Poroshenko in Kyiv on August 24, US Secretary of Defense James Mattis stated, “Mr. President, it’s an honor to stand alongside you on your independence day.  Have no doubt the United States also stands with Ukraine in all things.  We support you in the face of threats to sovereignty and territorial integrity, and to international law and the international order writ large.
We do not, and we will not, accept Russia’s seizure of the Crimea.  And despite Russia’s denials, we know they are seeking to redraw international borders by force, undermining the sovereign and free nations of Europe. […]
In 1994, Russia signed the Budapest memorandum, as the president said, and alongside the United States, the United Kingdom and Ukraine.  And that provided Ukraine with assurances that all parties — all parties would respect its independence, its sovereignty and its existing borders. […]
Unfortunately, Russia is not adhering to the letter, much less the spirit, of these international commitments.  The U.S. and our allies will continue to press Russia to honor its Minsk commitments, and our sanctions will remain in place until Moscow reverses the actions that triggered them.  […]
Mr. President, we continue to support Ukraine and remain committed to building the capacity of your armed forces to defend their country and to defend — protecting the Ukrainian people.   […]
I look forward to continuing to build on that partnership, which we strengthened in June, when President Trump hosted you, Mr. President, at the White House, and we reinforced today during our meetings, here in the beautiful, historic city. […]
Regarding the relationship that we have — the strategic relationship, I believe that no relationship stays the same.  It either gets weaker or stronger.  And by being here, I’m making a statement that we intend to strengthen the relationship between our two countries.  I need to come here and to better understand the situation your soldiers face on the front lines.
This permits me, better informed, to go back and advocate for what I believe you need, as brought to me by your minister of defense and, certainly, your president.  For example, we’ve just approved — just very recently, last couple of weeks, another $175 million worth of equipment, including some specialized equipment that can be used to help defend the country, bringing to a total of nearly $750 million in the last several years.
So we are in this very, very much in support of you.  I would also point out that, on the defensive lethal weapons, we are — we are actively reviewing it.  I will go back, now, having seen the current situation, and be able to inform the secretary of state and the president in very specific terms what I recommend for the direction ahead.  […]
Defensive weapons are not provocative unless you’re an aggressor, and clearly, Ukraine is not an aggressor, since it’s their own territory where the fighting is happening.”

The full transcript of the press conference is available here

5. “Normandy” Format leaders issue Joint Statement
Ukraine’s Presidential Administration reported on August 22, “The President of Ukraine held a phone conversation with the leaders of the Normandy format – the President of France, the Federal Chancellor of Germany, and the President of Russia.
Petro Poroshenko informed of today’s visit to the town of Shchastia located close to occupied Luhansk, and his meeting there with representatives of forward patrol base of the OSCE [Special Monitoring Mission], which is permanently based in Stanytsia Luhanska. The President of Ukraine expressed full support to its 24-hour activity in this location. Petro Poroshenko also called for immediate release of all Ukrainian hostages illegally held in captivity.
As a result of the phone conversation, the leaders of the Normandy format agreed the following joint statement:
The Heads of State and Government of the “Normandy” format, France, Germany, Russia, and Ukraine, held a phone call on August 22, 2017.
They expressed their strong support for the imminent decision of the Trilateral Contact Group on August 23 to announce a ceasefire on the occasion of the beginning of the school year.
The leaders expressed their expectation that such a ceasefire would turn into a sustainable improvement of the security situation, for the benefit of the schoolchildren and for the entire civilian population in Donbas.
On the basis of a sustainable ceasefire, the leaders committed to personally stay engaged in the further implementation of the Minsk agreements.”
5. CUTIS launches CUFTA: Opening Doors for Canadian Business in Ukraine 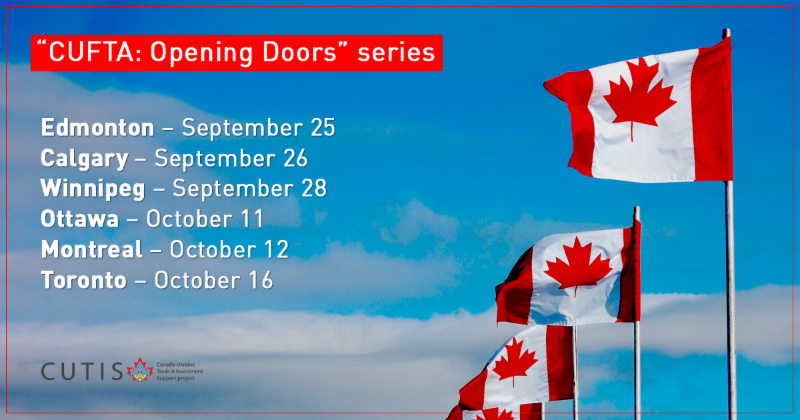 The Canada-Ukraine Trade and Investment Support (CUTIS) project announced the launch of CUFTA: Opening Doors for Canadian Business in Ukraine, “a series of cross-Canada networking events to help Canadian Business benefit from opportunities created by the Canada-Ukraine Free Trade Agreement (CUFTA).
The CUFTA: Opening Doors networking events will take place in Edmonton –September 25, Calgary – September 26 and Winnipeg – September 28, and Ottawa –October 11, Montreal – October 12 and Toronto – October 16, 2017.  Presentations will be made by the GAC Regional Trade Commissioner, the President of Canada-Ukraine Chambers of Commerce, The Ukrainian Ambassador to Canada, and senior Canada-Ukraine Trade and Investment Support (CUTIS) team members.
The CUFTA was signed on July 11, 2016, entered into force August 1, 2017. This represents an important milestone in the Canada-Ukraine bilateral relationship.              In addition to generating commercial benefits for Canadian businesses, CUFTA will support the economic reform and development efforts of the Government of Ukraine, strengthen the Canada-Ukraine partnership for peace and prosperity, and help pave the way for long-term security, stability, and broad-based economic development in Ukraine.”