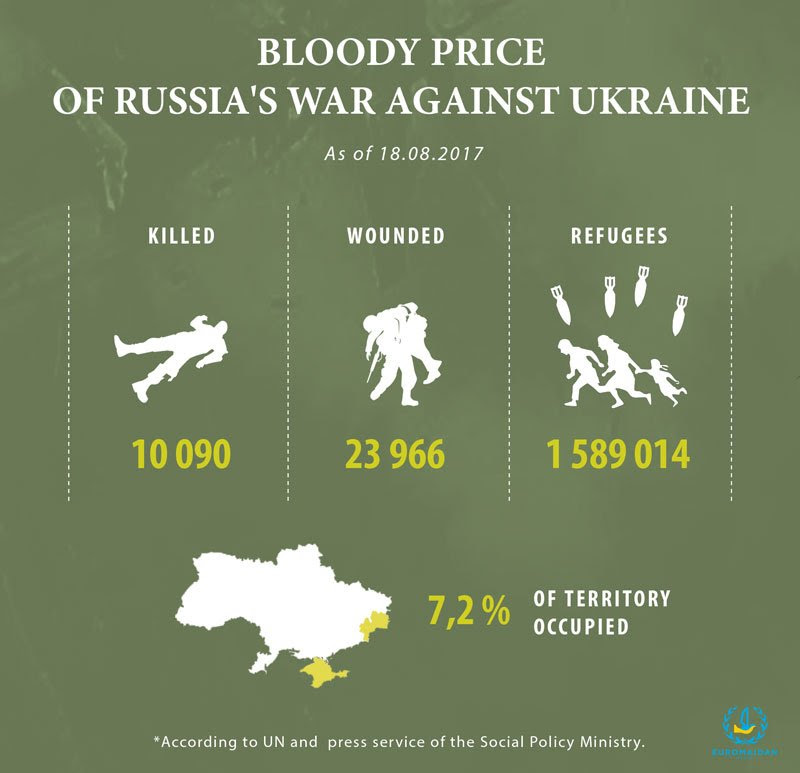 1. Russian Invasion of Ukraine
The General Staff of Ukraine’s Armed Forces reported that during the week of August 11-August 17, three Ukrainian soldiers were killed and 35 Ukrainian soldiers were wounded in action on the eastern front. Throughout the week, Russian-terrorist forces opened fire 189 times on Ukrainian positions on the Luhansk, Donetsk and Mariupol sectors of the front, including at least 68 times with heavy weapons – mortars, artillery, Grad rockets and tanks.
2. Saving lives: Canadian Armed Forces members mentor Ukrainian Combat First Aid instructors

In an article published by Canada’s Department of National Defence, Major Carrie McQuiggan, Canadian Armed Forces Nursing Officer, OC of Medical Training for Operation UNIFIER, wrote, “The Canadian Armed Forces (CAF) Operation UNIFIER is providing Combat First Aid instruction and mentorship to aid the Ukrainian Armed Forces in their efforts to save lives.
Soldiers are receiving the lifesaving knowledge and equipment they need thanks to the donations of equipment and Individual First Aid Kits provided by Canada, the Ukrainian Armed Forces (UAF), partner nations, and charitable organizations.
Along with the United States and Great Britain, Canada has been working with Ukrainian Medical Reforms staff and Instructors from the 205th Ukrainian Armed Forces Tactical Medicine Training Centre. They are developing medical training programs. Completed programs include a basic level lifesaver course designed for all soldiers, as well as an enhanced program and a Combat Medic course.
‘The Canadian staff, Regular and Reserve Force Medical Technicians, belong to Line of Effort 5 on Operation UNIFIER,’ explained Sergeant T.S. Shackhouse, the lead instructor for the Line of Effort 5. ‘They are responsible for establishing a cadre of Combat First Aid Instructors within the Ukrainian Armed Forces to ensure delivery of basic lifesaving skills to their soldiers.’
UAF instructors from across Ukraine have demonstrated a keen interest in learning and sharing their own knowledge and experience with the Canadian team.
‘They joined other instructors from around Ukraine, and under the mentorship of medical staff from Canada and the United States, the instructors conducted a combat first aid course for over 600 Ukrainian soldiers,’ said Sergeant Stackhouse.
Combat First Aid instructor candidates arrive for training with a variety of combat experiences and previous knowledge. Many of them have deployed to the Anti-Terrorist Operation and have seen and assisted casualties with severe injuries and multiple traumas. They have put their Combat First Aid training into action and are able to share their previous experience with their students through realistic tactical scenarios.[…]
Ukrainian Instructors at the Tactical Medicine Training Centre are designing high quality programs that reflect NATO standards and use modernized equipment. They have reviewed literature and products from trauma experts around the world and are incorporating this knowledge into the development of their courses. They should be very proud of the work they have accomplished.”
3. Statement by Ukraine’s Ministry of Foreign Affairs on Russia’s political repressions against citizens of Ukraine 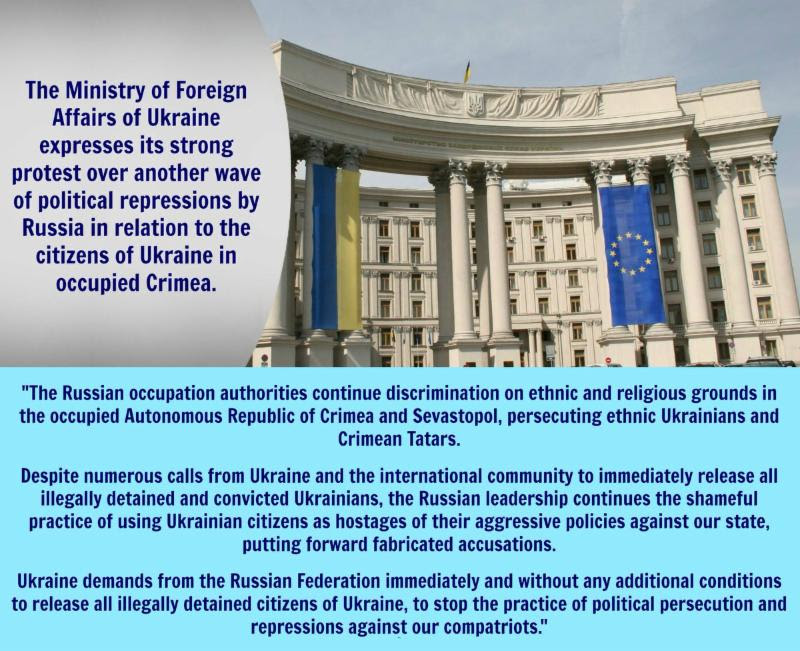 Ukraine’s Ministry of Foreign Affairs stated on August 14, “The Ministry of Foreign Affairs of Ukraine expresses its categorical protest and outrage over yet another wave of political repressions and human rights violations by the Kremlin regarding the citizens of Ukraine.
The Russian occupation authorities continue the discrimination on national and religious grounds in the occupied Autonomous Republic of Crimea and the city of Sevastopol, persecuting ethnic Ukrainians and Crimean Tatars.
At least five politically motivated sentences of imprisonment were announced, seven people were arrested or fined in Crimea over the past month. Also, at least three searches in the houses of the Crimean Tatars were conducted over the past week.
The cynical mass searches, a time-tested NKVD practice, as well as a series of arrests of those supported the 76-year-old Server Karametov who was arrested for the picket, are evidence of the continuation of the Kremlin regime’s bold attack against everyone who disagree with the occupation.
Despite numerous appeals by Ukraine and the international community demanding the immediate release of all illegally detained and sentenced Ukrainians, the Russian leadership continues a shameful practice of using Ukrainian citizens as the hostages of its aggressive policy against our state, making false accusations.
We express grave concern regarding the deteriorated health of the Ukrainian citizen Ruslan Zeitullayev, illegally sentenced on the territory of Russia, who on July 27, 2017, began another hunger strike to protest against Russian legal arbitrariness due to his unjustified sentencing to 15 years of deprivation of liberty. We demand that Russian side immediately allow Ruslan Zeitullayev to be examined by Ukrainian doctors.
Ukraine is demanding that the Russian Federation release all illegally detained citizens of Ukraine immediately and without any further preconditions, and cease the practice of political persecutions and repressions against our compatriots.”
4. Ukraine’s Cabinet of Ministers approves next stage of public administration reform
On August 17 Ukraine’s Cabinet of Ministers approved a series of regulations opening the next stage of public administration reform. As part of public service reform, the Government is launching an open competition for new positions in 10 pilot ministries and several government agencies.
The Cabinet of Ministers stated, “In accordance with the decisions approved by the Cabinet of Ministers, new structural units – policy directorates, as well as strategic planning and European integration directorates will be created in the pilot ministries, focusing on the key function of the ministries – the formation of policies in their spheres of responsibility. Open competitions will be held for the appointment of the heads of directorates. […]
The government expects that due to open competitions, the public service will be replenished by a significant number of new professionals in business, civil society, as well as from the best employees in the public sector. Candidates for all available vacancies will be selected through a transparent competition according to international recruitment standards.”
5. Ukraine GDP grows 2.4% in 2nd quarter 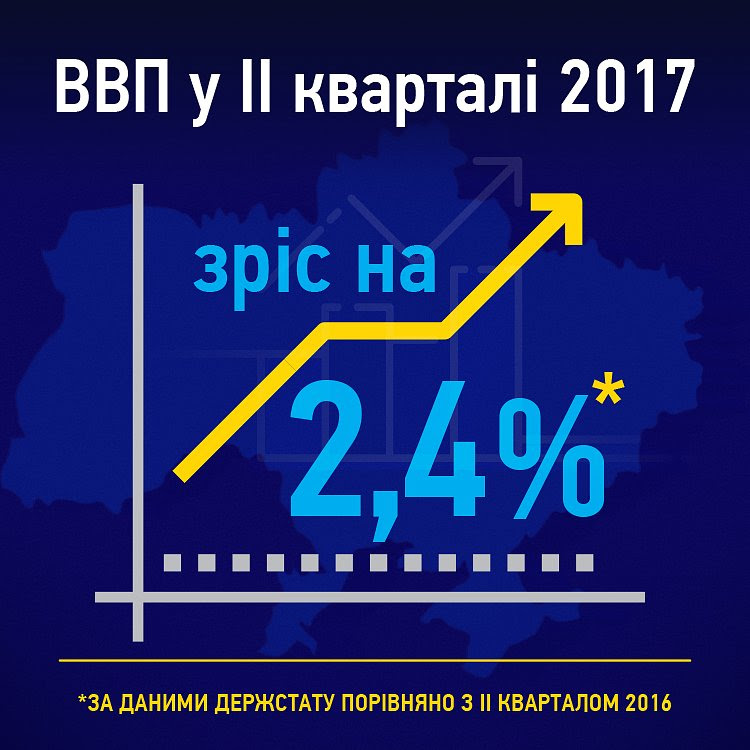 Ukraine’s GDP grew by 2.4% in the 2nd quarter of 2017, compared to the 2nd quarter of 2016. Ukraine’s GDP grew 0.6% in the 2nd quarter of 2017, compared to the 1st quarter of 2017, according to data released by the State Statistics Service of Ukraine.
The Ministry of Economic Development and Trade stated on August 14 that the “the key prerequisite for growth is economic reform, improvement in business confidence and growth in consumer activity with an increase in wages. In addition, a positive impact was provided by external market conditions, namely – growth in commodity prices, particularly metals, iron ore and grain, as well as a high level of construction activity at industrial and infrastructure facilities. […] The Ministry of Economic Development and Trade forecasts GDP growth at 1.8-2% for 2017.”
6. Ukraine exports grow 24.2% in first half of 2017
Ukraine’s Ministry of Economic Development and Trade reported that Ukraine’s exports grew by 24.2% (or $4.3 billion) when compared to the first half of 2016. Exports totaled $20.7 billion for the first half of 2017. Agricultural exports grew by 28.9%; metallurgy exports by 23.4%; mineral exports by 61.4%; machine building products by 14.2%; various industrial products by 23.1% and light industry products by 9.7%.
0 Likes