Third Anniversary of the Downing of Flight MH-17 by Russian-backed Terrorists17 July 2017
July 14, 2017in Holodomor 0 Likes
Ukraine: Weekly Bulletin
July 8-14, 2017
1. Russian Invasion of Ukraine
The General Staff of Ukraine’s Armed Forces reported that during the week of July 7-13, two Ukrainian soldiers were killed and ten Ukrainian soldiers were wounded in action on the eastern front. Throughout the week, Russian-terrorist forces opened fire 184 times on Ukrainian positions on the Luhansk, Donetsk and Mariupol sectors of the front, including at least 52 times with heavy weapons.
2. Russia weaponizes citizenship against Oleg Sentsov and other Ukrainian political prisoners

Ukrainian filmmaker Oleg Sentsov, illegally imprisoned by Russia since 2014, turned 41 on July 13. The Kharkiv Human Rights Protection Group (KHPG) reported, “After invading Crimea and faking a ‘referendum’ on ‘joining’ Russia, Moscow is applying strictly selective Russification in its persecution of Ukrainians.  While it has banned or even deported some Crimean Tatars from their homeland as Ukrainian citizens, it is falsely claiming that Ukrainian filmmaker Oleg Sentsov and civic activist Oleksandr Kolchenko automatically’ become Russian citizens.  That, at least, is the current story which, like all of Moscow’s claims regarding Ukraine is varied as required.
Sentsov, Kolchenko and two other opponents of Russian annexation – Gennady Afanasyev and Oleksiy Chirniy – were seized by the Russian FSB in May 2014.  They were held incommunicado for three weeks, first in Crimea, then in Moscow, before any lawyer was allowed to see them.  This is of critical importance since there was literally no evidence of any ‘terrorist plot’ with the entire case, and eventually Sentsov’s 20-year sentence and Kolchenko’s 10 years, based solely on the ‘confessions’ of the other two men.
Later in court, Afanasyev found the courage to retract every word of his ‘confession’, stating clearly that it had been given under torture.  Sentsov had, from the outset, described the torture that he was subjected to, but had withstood. This FSB ‘plot’ was chillingly Stalinist in many respects, including the total disregard for plausibility. […]
Claims that Sentsov, Kolchenko and Afanasyev had ‘automatically’ become Russian citizens began early on. […]
Both Kolchenko and Sentsov objected vehemently when Russia began claiming the men to be its citizens. With the prosecutor initially denying Kolchenko’s Ukrainian citizenship altogether, his lawyer lodged an application with the European Court of Human Rights. […]
Russia is using this very cynical ploy to deprive Sentsov, Kolchenko and other Ukrainians held in Russian on politically motivated changes of their right to consular advice and protection under international law.  Having violated international law by occupying another country’s territory, it is indeed treating opponents as serfs who ‘come with the land’ it grabbed.”
More on Russia’s illegal imprisonment of Oleg Sentsov is available here:http://khpg.org/en/index.php?id=1499857289
3. NATO Secretary General addresses Ukraine’s Parliament 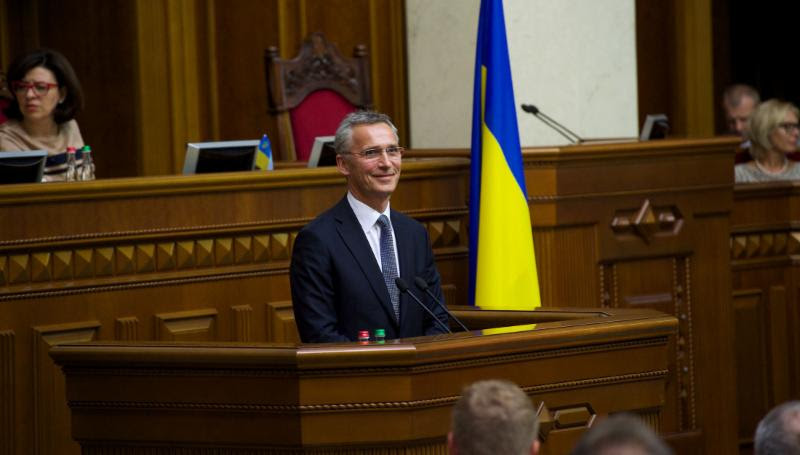 On July 10, NATO Secretary General Jens Stoltenberg addressed Ukraine’s Parliament. He stated, “Today we are here to show solidarity with Ukraine and to underline our support for Ukraine’s sovereignty and territorial integrity. Russia’s annexation of Crimea dealt a terrible blow to Ukraine. It also has serious implications for all the free countries of the world. It was the first time since the end of the Second World War that one European country had annexed part of another by force. It undermined the decades of progress that all nations – including Russia – had made to establish a rules-based international order, where borders are respected and where all nations reject the idea that one country should be beholden to another, within a ‘sphere of influence’.
I have said this many times before, but let me say it here, in the sovereign parliament of the Ukrainian people. NATO does not, and will not, recognise Russia’s illegal and illegitimate annexation of Crimea. Russia, and you know this better than anyone else, is trying to destabilise Ukraine, through its support of the militants in the east, its cyber-attacks, disinformation and not least by the presence of Russian forces in Eastern Ukraine. This must end.  Europe and North America are united in their condemnation of Russia’s actions and in their continued support for economic sanctions. Russia must withdraw its forces and military equipment from Ukraine’s internationally recognised and sovereign territory.  […]
Ukraine is a sovereign nation and it has the right to choose its own security arrangements. Last month, NATO welcomed Montenegro as the 29th member of our Alliance. This shows that NATO’s door remains open. The road to NATO membership is not easy. For those who seek it, it requires dedication and substantial reform. But in the end membership is a decision for the 29 members of the NATO Alliance and for those who wish to join. And for them alone. No one outside has the right to try to intervene or to veto such a process. […]
Ukraine needs modern, efficient armed forces. It needs strong, accountable, democratic institutions. It needs strong, accountable and democratic leaders. Ukraine needs you to be the best you can be! For twenty years, NATO has stood by Ukraine’s side and NATO will continue to stand with you in the long and difficult years ahead.” Secretary General Stoltenberg’s full speech is available at http://www.nato.int/cps/en/natohq/opinions_146017.htm?selectedLocale=en
4. EU-Ukraine Summit held in Kyiv 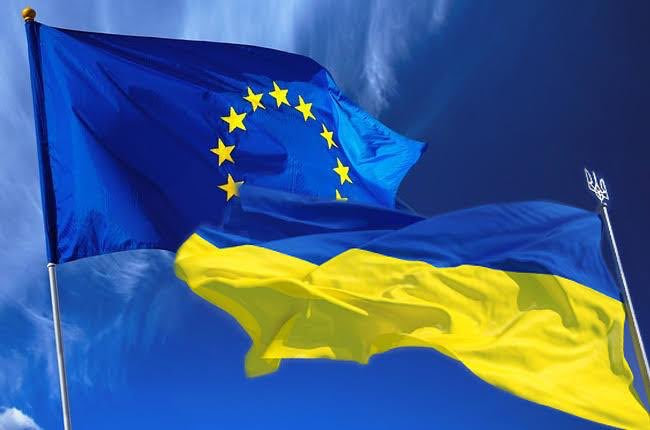 The EU-Ukraine Summit took place in Kyiv on July 12-13. Jean-Claude Juncker, President of the European Commission and Donald Tusk, President of the European Council represented the EU. Ukraine was represented by President Petro Poroshenko.
The EU stated, “Since the last EU – Ukraine Summit, which took place in Brussels in November 2016, a significant amount of progress has been made, bringing positive change to the lives of Ukrainian and EU citizens.
The ratification of the Association Agreement, including the Deep and Comprehensive Free Trade Area (AA/ DCFTA), two days ago, will mean its full entry into force on 1 September 2017. The Association Agreement provides the blueprint for Ukraine’s ambitious reform path and fosters trade and investment between the European Union and Ukraine. After more than one year of provisional application of the DCFTA, trade has grown by 10%, cementing the EU as Ukraine’s first trading partner. […]
The leaders assessed the state of play in Ukraine’s implementation of its ambitious reform efforts. The Ukrainian authorities have undertaken intense and unprecedented reforms in many areas, including: Decentralization; public broadcasting; anti-corruption; the judiciary; police reform; public administration; public finance management and procurement; trade; energy; the banking system
health care.
This has been achieved despite severe security challenges caused by the ongoing conflict in the east of Ukraine. At the Summit, EU leaders stressed the importance of continuing such efforts and strengthening the implementation of reforms in crucial areas such as anti-corruption. Fresh impetus to strengthening the functioning and independence of anticorruption institutions, such as the National Anti-Corruption Bureau, the removal of the extension of e-declaration of assets to activists of anti-corruption NGOs, setting up a high anti-corruption court and ensuring transparency of the selection of judges to the Supreme Court, are vital in this respect. […] Both sides agreed on the importance of continuing to accelerate reforms and their sustained implementation. […]
At the Summit, the European Union announced the preparation of €200 million of priority programmes for 2017 to support conflict-affected areas in the east of Ukraine; energy efficiency programmes, including contributions to the Energy Efficiency Fund established by Ukraine; public finance management; support to key reforms; and the implementation of the AA/DCFTA via a technical cooperation facility. The EU’s newly-established External Investment Plan provides additional new funding opportunities for Ukraine. […]
The European Union reiterated its continued and unwavering support to Ukraine’s unity, sovereignty, independence and territorial integrity. The European Union condemns and does not recognise the illegal annexation of Crimea and Sevastopol by the Russian Federation. Leaders reiterated the full implementation of the Minsk Agreements as the basis for a sustainable and peaceful settlement of the conflict in eastern Ukraine.”
5. Joint Statement of the NATO-Ukraine Commission
The NATO-Ukraine Commission met on July 10 in Kyiv in the presence of Ukraine’s President Petro Poroshenko and members of Ukraine’s Cabinet of Ministers, to mark the 20th Anniversary of the Charter on a Distinctive Partnership between NATO and Ukraine. NATO “reiterated its strong support for Ukrainian sovereignty and territorial integrity within its internationally recognized borders, and its inherent right to decide its own future and foreign policy course free from outside interference, as set out in the Helsinki Final Act.” The Joint Statement of the NATO-Ukraine Commission issued following the meeting is available at http://www.nato.int/cps/en/natohq/official_texts_146087.htm?selectedLocale=en
0 Likes